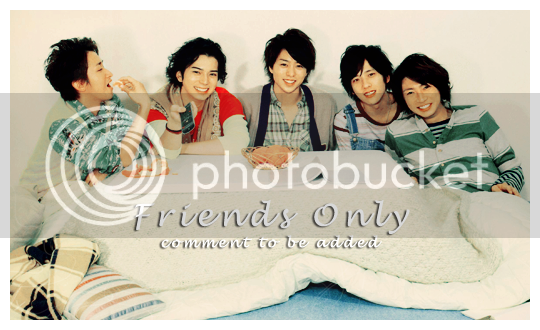 My journal is write I rant about my JE boys, life, and everything else in between.  Of course the fanfictions will be open to the public but to those who want to read my rants all, those will be friends only.  Some rant entries will be open to the public due to me wanting to share the info to other faithful JE fangirls like myself.  If you want to be mutual friends, leave some information about yourself here.  I love making LJ friends but I suggest you reading my profile and get to know me before you decided whether or not to be friends.  ^__^

MY HUSBAND DOESN'T LIKE FANGIRLS SO LET'S BE FRIENDS!

DISCLAIMER: All persons listed and written about here are being portrayed in a completely hypothetical and fictional manner. No intimate knowledge of these people is meant or implied. These writing are for entertainment and personal purposes only. No profit is being made from them. Wow, it has been forever since I've posted on here.  I'm sorry to say that I have been MIA from LJ for a while.  Life and school caught up big time.  I do miss fangirling out about arashi and all the JE groups.

Erm just a quick update.  My 2nd year of college has pasted.  I had a bf in the beginning of the year.  He was my first love.  I loved him with all of my heart.  And then he broke up with me 4 days after my birthday.  Then he turned into my first heartbreak.  I was depressed beyond reason.  I tried to get back with him.  He treated me like shit and talked crap about me behind my back.  It was hard to live because right after the break up, I had to see him everyday because we were on the same dance team together.  Spring break came along and the dance team won 2nd place.  Such an achievement!  But my suspicions of him and my friend hooking up were correct.  At the club party where we all were celebrating with the other dance teams, I saw them.  And I got depressed.  He went back home to Houston and I went back to Dallas.  I decided to be mature and send him a message via Facebook saying sorries and stuff and if we could be friends.  That bitch cussed me out, calling me names and things I never thought he would say to me.  And then he confessed about cheating on me during winter break.  And then he blocked me on facebook.  I was a wreck.  But I'm much better now.  Around the time he broke up with me, I found a way to cope through music, dance, and this guy name Daniel.  Yes, he was my rebound.  But we are together now.  And so happy.  If it wasn't for Daniel, I would have gave up on love.

Aside from my love life, school sucks balls.  I'm changing majors from nursing to broadcasting.  So you might see me on TV as an entertainment news reporter like mario lopez.  I wanna be like that.

Until next time, See you later my loves :)

Oh, I have a tumblr.  Follow me!  I update on there way more then here.  boringasiangirl.tumblr.com/

Man, how long as if been since I have been on LJ?  Forever.  Sorries!!!  College is taking over.  I still listen to JE boys but I'm not as updated on KJ8 or NEWS as everyone else.  I still keep up with Arashi (my loves!) but I'm missing out on my favorite Arashi Fanfics (NOOOOOOO!)

So anyways, I'll try my best to update here at least once a week!  I'm not dead.  And no, I haven't really been updating on my stories and/or music but I'm still here.  Sorries for that! :DDDDDD

The list is out and the prices are here (well...at least most of them).  Who's going to save a crap load of money just for a t-shirt or something? ME! haha.  I'm hoping that everyone knows how to convert from yen to dollars or euros or where ever you're from!

I so want a cellphone strap, a shirt, and a shopping bag.  Throw in a penlight.  OMG!  So excited!

HEY EVERYONE!  PLEASE HELP ME OUT FOR A SECOND!  I'M IN A CONTEST AND THE WAY TO WIN IS TO GET TONS OF VIEWS!  I'M ONLY UP TO 200 AND I WANT TO WIN THIS BADLY!  PLEASE WATCH IT, TELL FRIENDS AND OTHER FRIENDS AND OTHER FRIENDS (ESP ON LJ, I LOVE MY F-LIST).  ALL YOU HAVE TO DO IS SIMPLY WATCH IT, MAYBE COMMENT BUT IT MEAN A LOT TO ME IF YOU SIMPLY WATCH IT AND SPREAD THE WORD!  MORE VIEWS, BIGGER CHANCE FOR ME TO WIN AND GET CLOSER TO MY DREAM!!!

Part 1: Video Viewing
Contestants have from July 31, 2010 until August 6, 2010 to get as many YouTube views as possible.
The top 10 most viewed videos will move onto Part 2.
Get all your friends and family to start watching!

Part 2: Top 10 Voting
The top 10 most viewed videos from YouTube will be available at www.jcpvote.com for voting between August 7, 2010 to August 20, 2010.
Visit www.jcpvote.com to vote for your favorite video!
.
For more information about the 2010 ISA Concerts visit:
www.InternationalSecretAgents.com

Whoohoo! I have a chance to win this cd!

Whoohoo! I have a chance to win this cd!

So I am looking for some really good subbing communities for korean dramas.  Where can I find some?  I don't want d-addicts or withs2.com.  I don't do bittorrent or whatever HAN is.  I want the communties like Stormy and such. Such help a sister out.  Thank you!!!!

Sorry for the long hiatus, summer school is still in session for me.  But it's safe to say that I'm back now.  Now for an update on my life.  I had 4 wisdom teeth pulled out yesterday.  So I have slightly puffy cheeks.  I have a tumblr that is about my life, my fashion, and other things.  I have been covering songs and music.  I also want my beautiful LJ friends to go to my youtube and view my original song "Lemme Rescue You" so I could get popular and big.  I want Wong Fu Productions to see me and ask me to make a music video with them.  I really do.  But I kinda need to save up music for recording equipment.  This is going to be expensive.

So here is my video!  View it, love it, comments, spread the word!  I really want people to know about my music!!!!

Thanks I love yall!  And I will be back with more productive posts, I promise!!!

One word: College finals.  Okay that's two but you get what I mean.
Collapse